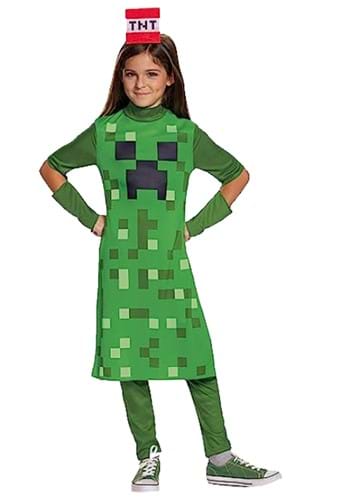 Sometimes it is most fun to dress like the hero of the story. As the hero, we get to be the one who builds the world up, turns it into something better than before. We get to protect our fellow man and the defenseless animals around us. Sometimes, however, it’s much more exciting to be the bad guy. The villain gets to wreak havoc and destroy all the good that the hero has provided the world. The villain leaves such an impact behind that they’re sometimes more recognizable than the crew coming in to save the day.

When it’s time to embrace a little bad behavior instead of heroics think of Creepers. They literally leave an impact behind, typically in the form of a large crater where a block-built home or village once stood. The silent and sneaky Creepers make other Halloween monsters look tame. A hiss is all the warning they give before causing total destruction. They have made such an impression on their world that Creepers are an official (and terrifying) mascot for everyone’s favorite sandbox video game, Minecraft.

This Halloween your kiddo can become the green pest with this Creeper Costume. This simple costume comes with 3 pieces that will totally transform your little one into the explosive character. A shift dress bears the Creeper’s ghoulish expression and the signature pixel-texture of Minecraft. The included leggings match the sleeves and will make outdoor stealth missions a breeze for your kiddo. A TNT headpiece completes their look. In true Halloween form, the Creeper will bring the bit of spooky that might be missing from your standard trick-or-treating experience.

They may not be anyone’s favorite character, but Creepers are hard to miss. From Minecraft to popular culture the explosive green mob has inspired music, clothing, and now Halloween scares. With this Creeper Costume, your little one will be ready to leave their own impression on the neighborhood!