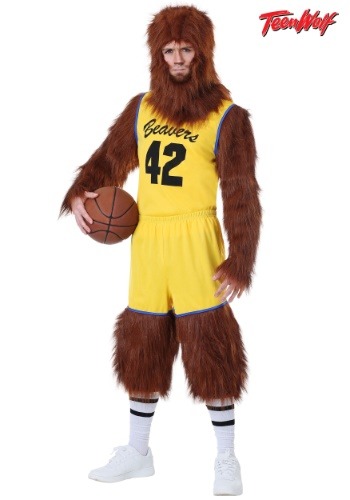 Lately, life has been going...OK. If by "OK" you mean that you're not so popular, your team isn't doing so well, and the girl of your dreams doesn't know you exist. Yep, sounds like high school to us, buddy! Rather than throw in the towel and suck it up for the rest of your time there, we have a solution that worked pretty well for our friend Scott Howard...

...turn into a werewolf! We know, it sounds a bit unconventional. More classic advice may be to try to make some new friends, or to join a club, or run for student council. But those other solutions don't have guaranteed results. And this Teen Wolf Men's Costume does! When Scott Howard transformed into the wolf before the eyes of fans and friends at his basketball game, he was nervous he'd be shunned even more by his peers. But on the contrary, his wolf persona became the biggest thing the Beavers had ever seen, and he became cool, popular, and a star player, too! So if you'd like to see things turn around for you before senior year (or you're just a really huge fan of the film), this furry look is as loveable as it is cool. You, too, could be surfing atop your very own Wolfmobile before you know it!

This head-to-toe look is officially licensed, and was crafted in our design studio to accurately mimic Scott's look from the classic 1985 film! You get a yellow Beavers team uniform with Scott's number, 42, on it! Both the top and shorts have attached faux fur to create the wolf look along your arms and legs. The headpiece and socks complete your transition, and you didn't even have to wait for a full moon!

These Waves Are Yours

So enjoy the good life, buddy! We're happy to see things have turned around for you. We told you this costume was a sure bet. Now, go catch those waves and enjoy the attention!