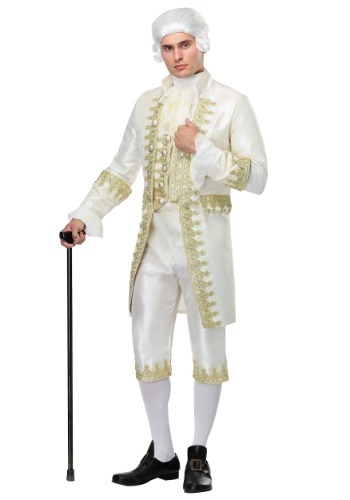 Life as a king in the late 1700s was a social one. In fact, kings were almost never left alone. From the moment Louis XVI woke up in the morning, he was surrounded by servants, advisors, and top guys from his various councils. And yes, luxurious royal activities abounded. He had to get his wig powdered and shaped. He went hunting with the boys. He entertained dignitaries in the hall of mirrors (we'll give you one guess what the walls of that hall are decorated with). Our point? The royal guy was super busy! With all the little details he needed to cover to keep his royal household happy, it's no wonder he lost track of what his subjects wanted!

This luxurious costume is Made by Us, meaning the king's top looks have been researched by our in-house designers. The high-waisted short pants, the long jacket, and the waistcoat all have a Rococo-inspired trim, making it look right at home in the over-the-top trappings of Versailles. You'll love the little details from the buttons to the lightweight cravat. Just be sure you avoid any swarms of angry French peasants.

Louis's reign might not have been a popular one, he's the only king that literally lost his head in the end. But we like to think that his ungraceful exit from the throne room was a symptom of the times rather than a personal hit at this fashionable king. If it hadn't been for the expensive wars, the uncomfortable wigs everyone was wearing, and the fact that the peasants wanted freedom and access to food, Louis probably would have been fine! How can you stay mad at a man wearing gold filigree trimmed short pants? Whether you're heading out with Marie Antoinette on your arm or you're making your royal debut solo, this costume will allow you to start Louis's reign fresh!