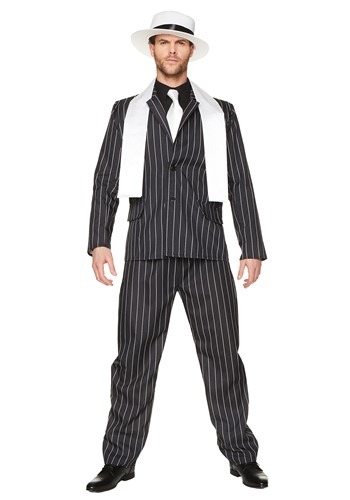 Listen, we're not going to suggest that you do anything illegal. We've seen all of those old gangster movies. You know the ones we're talking about! The main character gets involved with the wrong crowd, then manages to climb to the top of the food chain in the criminal underworld until he's the head of his own seedy empire that undermines the law. It almost sounds sort of awesome... until you get to the end of the movie. That's the part where the main character goes down in a blaze of glory when the coppers get to him and dismantle his criminal empire! We do, however, want to point out that there's no crime in just DRESSING like a criminal. Those guys had a serious sense of style!

Inspired by the crime lords of the 1920s, this Men's Gangster Boss Costume makes you look like the king of crime! It comes with a pinstripe jacket with decorative pocket flaps in the front. It fits with buttons in front to capture that classic look of old gangster movies. The breast pocket even has a sewn-in pocket square, so you don't even need to learn how to fold a real pocket square (trust us, it's a little tougher than it might first seem). The pants have a matching pinstripe pattern and fit with an elastic band in the waist. The white satin scarf gives you that extra-classy look, so you can claim to be the big boss! Finally, the included hat brings the whole look together. And the best part about this whole ensemble? You don't have to get in trouble with the law to get this dangerous look!

It's Not a Crime

If you're interested in the gangster style, without any of the risky gangster behavior, then all you need is this simple Men's Gangster Boss Costume. It's the safest way to look like your favorite characters from those old gangster movies.