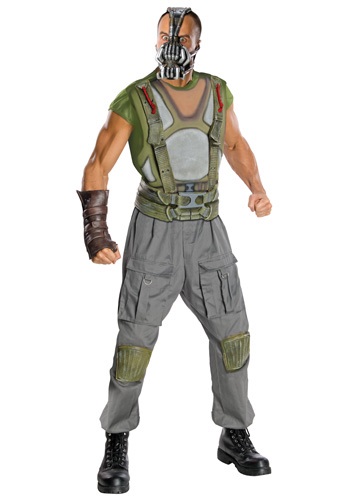 Gotham City has become sick with greed and corruption, and according to Bane, there is only one cure. Destroy it. This villain will stop at nothing to ensure that the rich and powerful of Gotham pay for their "crimes". And that is something we really admire. Even when the Dark Knight stands against him, this villainous martial arts master still stands by his convictions. What a guy. If he’s one of your favorite comic book villains, like he is one of ours, then grab this Men’s Deluxe Bane Costume and bring the pain this Halloween!

Bane is one of the only adversaries that Batman has ever has faced who defeated him. Bane has the right to proudly say that he indeed 'broke the bat'. Strength is not the only thing that makes him one of the most dangerous characters in the DC universe, he also has a superior intellect. Unlike the Joker’s method of madness and chaos for the sake of madness and chaos, Bane had an ultimate goal in mind. He may have wanted to destroy Gotham but only for the sake of making a new Gotham, one of his own creation. We think that’s kind of nice… maybe a tad bit evil, but mostly nice.

Grab this Deluxe Bane costume and help him with his plan. Don’t let the GPD or even Batman get in your way of the ultimate Halloween experience. Just make sure to practice your Bane impression, that’s the funnest part about this costume, after all! And why be bad if you're not going to have fun while doing so?