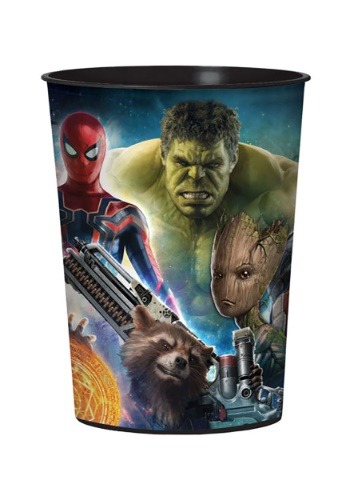 What a Cup Says

You tell a lot about someone by what kind of cup they use. A plain white cup says, “I’m really boring and I only like to drink water.” One with unicorns and rainbows says, “I’m an optimistic person who likes to see the best in the world.” This Marvel Avengers Infinity Wars party cup says, “I’m a freakin’ superhero. Deal with it.”

Yes, this officially licensed cup has everything that a superhero could need in a drinking cup. It holds 16 oz. of your favorite fluid, be it water, soda pop, milk, juice, beer, and any number of other drinks. Of course, that’s not the best part. The best part is the printed imagery on the exterior! Spider-Man is chilling on the side and he’s wearing his Iron Spider suit. Hulk is hanging out making his mean face. Teenage Groot is there and he’s full of teenage angst. Then we also have Rocket Raccoon on the bottom, who’s holding a really big gun. Doctor Strange is also doing some crazy magic on the bottom. This cup is truly is an experience!

Whether you’re headed to a party dressed up as Spider-Man, or you just need a new party cup for home, this Avengers cup is the one for you!