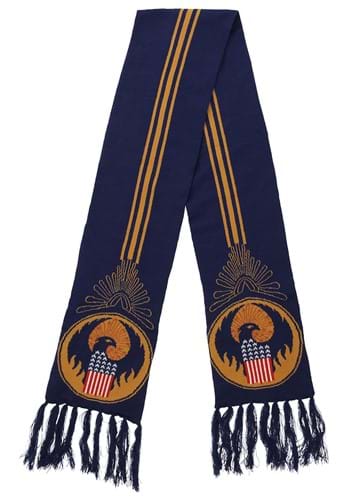 Look, we don't make the laws, but we think an ambitious young Auror not properly repping her Magical Congress of the United States of America affiliation should be downright criminal! Sounds about as awkward as a Potions professor without her cauldron. We can't have that, now, can we?

The Magical Congress of the United States of America, or MACUSA, is, of course, the magical body in charge of governing the wizarding community of the USA, performing many of the same functions as other wizard governing bodies, such as the Ministries of Magic and Councils of Magic. What are your ambitions there, anyway? Are you going to use your cunning to lead the Department of No-Maj Misinformation? Are you going to clean up others' messes in the Federal Bureau of Covert Vigilance and No-Maj Obliviation? Or are you going to put your thinking cap on in the Major Investigation Department?

Whatever you choose to do, you should be proud of your accomplishments and show it off properly! We have just the thing: it's our officially licensed MACUSA Knit Scarf, a warm acrylic knit scarf you can wrap around your shoulders, neck, or mouth depending on your way to work, depending on the forecast. We're so excited about your future in MACUSA, but we would be lying if we said we were any less excited about you trying on this amazing Harry Potter-themed scarf.