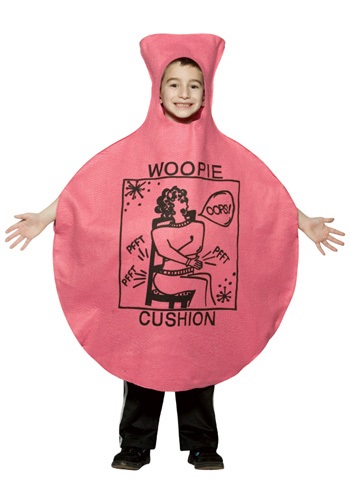 Long ago in Ancient Rome, there was a mighty Emperor who loved, above all else, a good joke. This royal prankster was quite notorious for throwing dinner parties that entailed hilarity at the expense of his royal subjects. For instance, when one of his high ranking officers would sit down, he would sit directly on top of a whoopie cushion that the Emperor had stealthily placed in the seat. Then the hilarious fart noise would abruptly interrupt all the surrounding conversations and everyone would burst into laughter.

So, as you can see even since those early, ancient days, the whoopie cushion was one of the most popular pranks. The trend of pranking friends with these novelty toys hasn't gone out of style and is still used to make people laugh to this day. There's just something about fart noises. They'll always be funny in our book! With this Whoopie Cushion Costume, your little one can be the funniest kid in the neighborhood. When your kiddo trick or treats around the town, adults will be reminded of their old prankster days and some children may get the opportunity to learn about the wonders of the whoopie cushion! Aww, Halloween. What a magical night.

Ensure that the whoopie cushion lives on in the next generation when you dress your kiddo with this hilarious costume. Oh, and the fart noises are not included. So we would encourage you to train your youngster in the arts of making fart noises with nothing but one's own mouth!