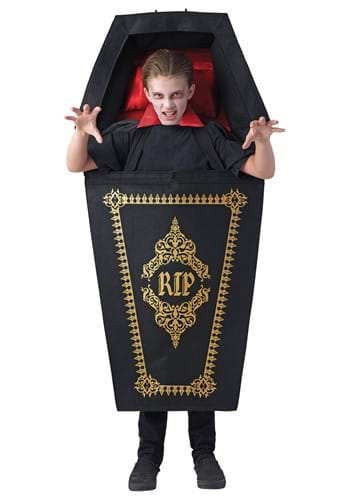 Have you heard the news? Some kids were goofing around near that crumbling, abandoned gothic castle and uncovered a secret door! It was bolted and padlocked from the outside with heavy chains, but they were so rusted that a few good pulls snapped them. The door opened into a stairway that led deep below the castle, into a dungeon with a single coffin resting on the table. They pushed the lid back to reveal a waxen figure - who came to life before their eyes!

Ever heard of Sleeping Beauty? Well, with this Vampire Casket Costume for Kids, you get to be Sleeping Scary! The unisex costume includes a full-sized yet lightweight tunic shaped to look like a stiff-sided balck coffin. It's printed with gold detail on the front, including faux embossing and the letters "RIP." Attached black shoulder straps keep it securely in place, while the red backing makes it look as though you're resting against a satin coffin interior.

Watch out, everybody! It may look like it's just a dead body, but don't let its peaceful appearance fool you! As soon as you wander within range, it will show its true colors as a deadly vampire, ready to suck the life out of the living. Your only hope is to bribe it with Halloween candy and hope to make your escape while it's sinking its fangs into your trick-or-treat assortment of delicious chocolate bars and sugary candy corn.