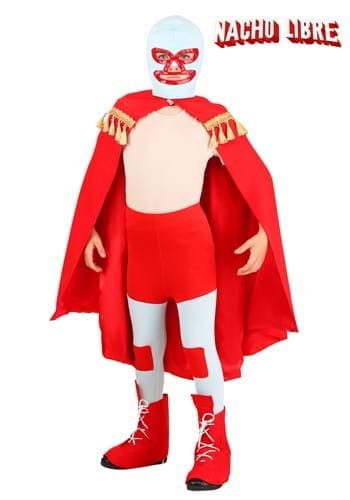 For Kids Who Wanna Nacho

It'd be easy to assume that kids just aren't into Nacho Libre. The offbeat humor of the comedy is a bit of an acquired taste. Some of the lines leave adults scratching their noggins, so there's a good chance that they'd go right over a child's head. And Ignacio's crush on Sister Encarnacion might not be something that children can really appreciate, either. But all the same, kids just love the film. Why?

The hilarious physical comedy of Jack Black, combined with action-packed wrestling sequences, means it's a movie kids just love to watch, even if they won't be able to fully appreciate it for a few more years. All of which means something very important. Your kiddo needs to go as Nacho Libre for Halloween! And we can get your little one set up for just that with our Kid's Nacho Libre Costume.

Our Kid's Nacho Libre costume is a pint-sized version of our immensely popular adult Nacho Libre wrestling outfit, and has details straight from the movie to make it authentic. The costume includes a shirt, pants, cape, mask, and boot covers. The pants feature red brief and knee patch sections but is one piece so it's easy to wear. The shirt features the color of white skin, so your kiddo doesn't have to be out trick or treating without a shirt on. The boots look like real wrestling boots, and the cape has golden tassels just like in the movie. Finally, your child just has to slip on the luchador mask to complete the movie realistic outfit. It's for fun!