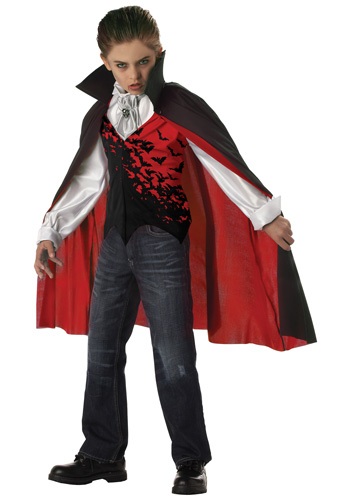 Listen to them. Children of the night. What music they make.

Vampires are honestly the coolest mythical monsters. (They are mythical right?) Sure, a werewolf can turn into a wolf, but only on the full moon. A vampire can turn into a bat anytime they want. And sure they can't go in the sun, but that just means they wont get any skin problems. And just look at their awesome castles. It's no wonder why your kid likes them so much.

This Halloween let your little monster become one of the undead with this Kids Dark Vampire Costume. It will be hilarious to watch them try to "fly" around the room. Gripping both sides of the red, and black cape, flapping their wings, and jumping off furniture. You won't even be mad that they're jumping off the couch. And hey, you've been looking for ways to get them off the Xbox for a while now. They will be having too much fun with their friends, trick or treating, and scaring friends in their class to even think about the latest video game. Just don't forget to pick up some vampire teeth to finish off their Child of the Night look.