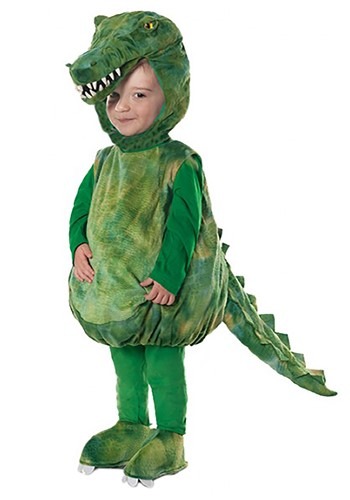 When you first brought your little bundle of joy home from the hospital, you were so excited, even though you knew you were going to face some unique challenges. For nine months, you had prepared for a beautiful baby, but you weren't expecting a little alligator to pop out! But you meant it when you said you didn't care what it was as long as it was healthy, and now you're the proud parent of a beautiful, green little reptile.

Being an alligator parent is a lot of hard work. For one, you had to replace your crib with a heated glass enclosure. (Luckily, the local zoo was going out of business and sold you one for cheap.) And all the baby bottles you bought proved pretty useless, because baby alligators just eat minnows, snails and worms. It can take a long time to dig up enough in your backyard. At least your little guy mostly sleeps through the night, as long as his heat lamp is on, but you're already dreading the teething phase.

Show off your adorable little alligator with this Kid's Bubble Alligator Costume. The costume includes a green scale-patterned body, along with alligator booties and an attached alligator tail in the back. There's also an alligator head hood that includes yellow eyes and a toothy smile. Say cheese!

You love your alligator baby more than anything else in the world. You're already daydreaming about his future. You'll have to send him to the very best private school, so that he can be admitted into an Ivy League University. He'll probably be the first alligator to graduate from Harvard! And then there's law school, and becoming a lawyer, and then becoming a judge... You hope he meets another nice alligator to fall in love with along the way. You really want some beautiful little alligator grandbabies!