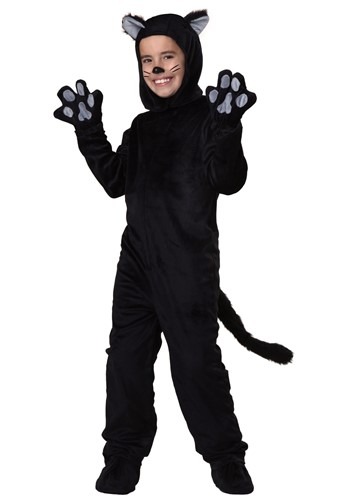 What's not to love about cats? They're soft, furry and they've officially taken over the internet as the cutest thing in the world. Have you ever seen that video of cats that are afraid of cucumbers? Hilarious and adorable. Hey, you know who else is hilarious and adorable? Your kid. Now, if only there was some way to combine the adorable nature of your child with the famous fuzziness of a kitty cat...

This black cat Halloween costume jumpsuit is covered in soft faux fur, with an attached tail, a zipper in front, and mitts with little paws attached to each sleeve for additional adorableness. The attached hood features a set of kitten ears on top that are just the cat's meow! Draw a set of little whiskers on your child's nose, and watch your back. Because if there's one we know about kittens, it's that they love to pounce!

So it turns out this is the year of the cat, according to your new feline member of the family. We do have to warn you, though, that when your little one is wearing this ensemble, they may start to exhibit some classic cat-like behavior. Aside from possibly being afraid of cucumbers and obsessed with boxes, don't be surprised if your little one also starts mewing at strange times of the night. Also, be ready for them to seem like they want you to open a door, like they want to go in the other room, only to change their mind after you open it! Your child is sure to grow out of this costume someday, until then, you might want to put a slipcover on your couch!