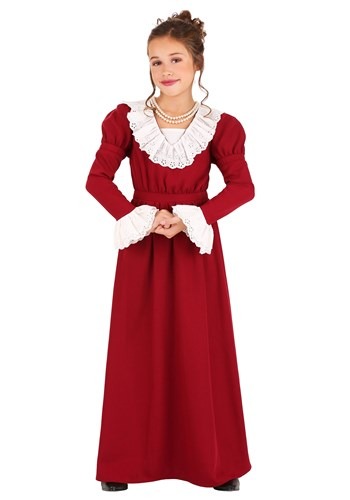 Most people can name the Founding Fathers: George Washington, Thomas Jefferson, John Adams… Heck, Alexander Hamilton even has a whole musical about him! These guys are famous, and rightfully so, but you know what they say: Behind every great man is a great woman. Most of the Founding Fathers were married and supported by loving wives, but you never really get to learn much about the Founding Mothers. We think it’s about time to change that!

Abigail Adams was the wife of John Adams, the second president of the United States. And she was pretty cool in her own right, too! For one, she was the first woman to be both the wife and the mother of a president. (Don’t worry, it wasn’t the same guy!) She also gave her husband tons of advice when it came to how to run the country. She was a champion of women’s education and spoke out against slavery. Of all the first ladies to dress up like for a costume party, we don’t think you could do much better than Abigail Adams!

This exclusive Kid’s Abigail Adams Costume is sure to be a hit, whether you’re going to an inauguration or just a costume party. It looks just like a dress that a fashionable lady from the early 1800s would wear when she’s hosting a party at the White House. The red, long-sleeved pullover dress is 100 percent polyester, with a zipper down the back center for easy wear. The collar and sleeve cuffs are trimmed with lace, while there is elastic in the waist for a cinched look. All you need is a quill pen and some parchment to complete the look!

Belle of the ball

Whether you’re preparing for a trip to the White House or just hosting friends in your own living room, you’ll definitely be the belle of the ball with this beautiful costume!