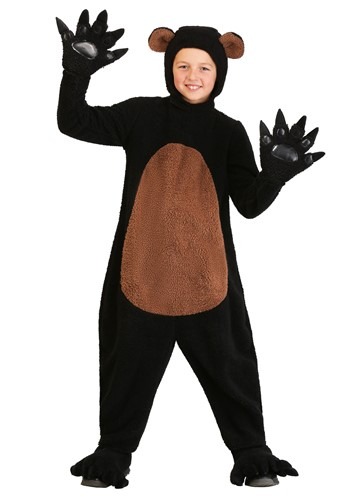 To Bear is Human

Grizzly bears are a lot like humans. At least, they're a lot more like us than most people think. Just think about it. They like to snack on honey, just like us. They're a big fan of getting some extra sleep during the winter and they even like a good back scritch just like us. And then there's the whole tale of Goldilocks and the three bears! In that tale they sleep on beds that are "just right" and they even sit down for a nice breakfast of porridge.

Of course, they are covered in a thick layer of fur. And sure, they spend a good portion of their day trying to catch salmon with nothing but their teeth. Alright, alright. You got us. Maybe bears aren't much like humans at all, but that's sort of why it's fun to imagine what it would be like to be a bear. Now, your child will have the chance to be a grizzly by wearing this Child Grinning Grizzly Costume.

This kid's costume turns your child into one furry ursine critter! The costume, which is an exclusive design by our costume designers, comes with a full body fleecy jumpsuit. The front has a light brown belly and the back has a little tail attached to it. The mitts and shoe covers both have stuffed claws on the ends to give your little one a ferocious look! The headpiece finishes the look off and features a generous opening for your child's face. It even has a pair of round little ears on top!

One of the Three Bears

Let your child indulge in the wild side with this kid's bear costume. You can even check out our adult bear costumes to recreate the Goldilocks and the Three Bears tale in real life!