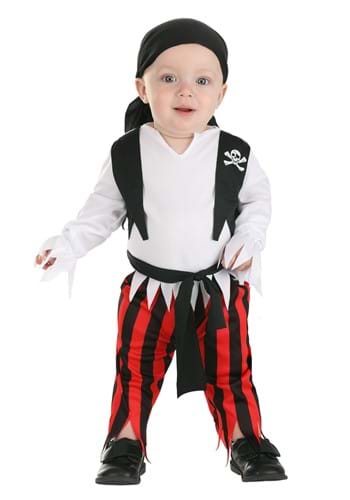 By Edward Teach's smoking beard! You've run afoul of the most ruthless pirate ever to sail the Seven Seas! Don't be fooled by his small size, or by his sweet smiles and gurgles. This pirate is not to be taken lightly. Unlike the cutlasses and cannons of his pirate brethren, he has an entirely different (and much more deadly) set of weapons in his arsenal. Try to fight it all you want: He's still going to steal your heart and hold it hostage. On the plus side, you won't mind at all.

This Halloween, dress your swashbuckling sweetie in an exclusive Pirate Costume for Infants! The outfit includes a white pullover shirt with a notched neckline, elastic sleeve cuffs, and a jagged hemline. The black vest panels are sewn onto the top, and the left side is printed with a skull and crossbones graphic. The black and red pants have an elastic waistband and jagged cuffs. A long waist sash can be tied as desired, as can the matching black scarf.

As mentioned before, this pirate has entirely different methods of attack. No gunpowder or grappling hooks necessary: Instead, he'll fuss for you to pick him up and then give you his patented Totally Adorable expression. He'll try to gum your phone and anything else you leave lying around, because as any pirate knows, anything that he wants should automatically belong to him. He doesn't need to visit the Caribbean to be the cutest scallywag ever!