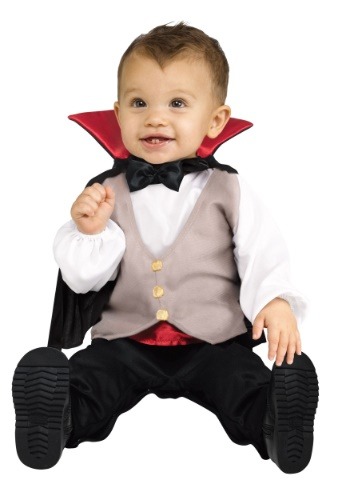 His L'il suit is wicked, and his cape is mean

His name is Li'l Drac, and he's pretty darn neat!

Yessir, there's a new character to add to the roster at Dracula's castle. His name is Li'l Drac, and this baby is a pretty serious vampire tot! And now, your little one can be this cool vamp when you get them this cute costume. He might fool everyone with his sweet ways, but when they see how official he looks in his vampire gear, they'll be convinced that he's the real deal!

Yes, he won't know the ins and outs of being a real vampire, but he can have an authentic style with this signature baby vampire costume. 100 percent polyester, it comes as a jumpsuit with an attachable cape. But the jumpsuit features details like a vest and bowtie attached, basically everything he needs to be a real deal baby Drac. Well, except for fangs. But there's still plenty of time for them to grow in!

This costume comes in infant sizes to get your littlest one into the vampire game. There's a lot of future Halloweens to look forward to with them, so why not start the Halloween tradition out right? As L'il Drac!

Size Chart
6/12mo12/24mo
Inches
Centimeters
Costume Sizing Tips
Questions & Answers
There are no questions for this item yet. Be the first to ask a question!
Ask a Question