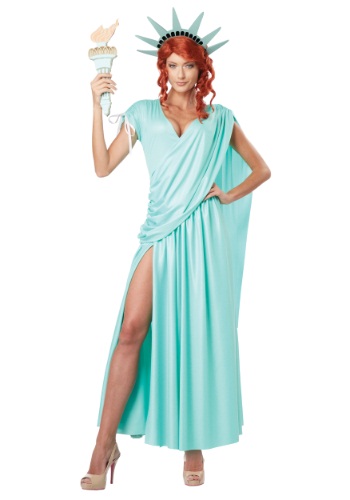 The French gifted the Statue of Liberty to the United States of America in 1886. They thought we were pretty great for abolishing slavery during the Civil War. It was Édouard René de Laboulaye, a French law professor, and politician who said, "any monument raised to American independence would properly be a joint project of the French and American peoples."

And you, being a patriotic woman, love the Lady Liberty as much as any other self respecting American. You love what she stands for. Liberty. Justice. Enlightenment. Freedom. You love the taste of salt water on the back of your tongue when you see her, and the oxidized copper she is made of. The green tint some how fitting on the edge of New York.

This Fourth of July don't just go to the parades, and watch the fireworks. Put on this Women's Lady Liberty Costume, and show the world what it means to be American. Show off your love of all things free. (And we don't just mean the parade candy.) Stop injustice in your home town, as you wear this mint-green dress. Enlighten people on being better to one another. Be a light for liberty in your community. Or just wear it to watch the floats go by in the hot July sun.