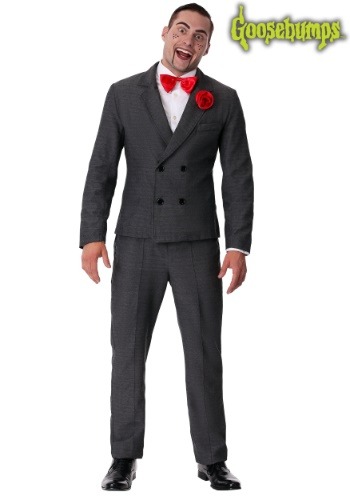 It has been over two decades since Mr. Wood came to life to terrorize and enslave those who would dare mutter the magical words that animated the horrific blend of all our terrors:  part clown, part doll, all possessed by evil.  Who knew that the evil dummy wasn't anything compared to Slappy!?  Fortunately, no matter how freaky the ventriloquist doll might be, it's just a little thing.  Even a child can grab it, tie it up, and eventually get rid of it!

But, it's been a long time.  Slappy has always had a pretty serious Napoleon Complex.  And, anyone possessed of that kind of dark magic is going to eventually figure something out.  The latest legends suggest that Slappy hasn't just stayed the same.  He's grown up.  He's ready every R.L. Stine book and seen every Goosebumps episode... and then some.  He's learned plenty of new tricks.  He's found the R-rated slashers, too.  Slappy's gone serious.

Show the world what happens when someone dares to utter the magical words haphazardly printed on cards near terrifying dolls.  Unfortunately, by legal decree, our design team has to include the words with this exclusive, officially Goosebumps licensed, Slappy Costume.  That might have something to do with how he keeps coming back!  Either way, the good news is that you'll look great in this suit-style costume which includes pleated grey pants, a bright red, satin bow tie, and a matching, textured jacket.  The latter features a red lapel flower and four button closures that make a sophisticated look for your supernatural needs.

We hope you didn't just read those words aloud.  They're there just to remind you which words not to say around Slappy and other such evil dolls.  If you did, it means trouble!  You'll be dealing with Slappy, now, either way!  Hmm, actually, with all his new growth, maybe you only have to think the words.  Uh-oh!