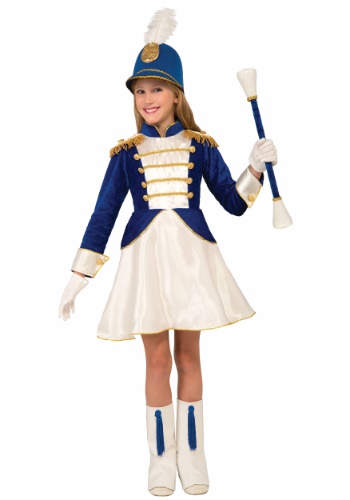 Do you hear that roar? It's the thunder of drums. It's the trumpets blaring. It's the dancers dancing! It's a marching band!!

You see them out in the stadium field, or coming around the corner of the street in the annual city parade. But whether it's a drum corps or a full blown marching band, did you know that they have fearless leaders? They're baton wielders of epic proportion. They sometimes dance, but they always ooze with awesomeness. Yup, they're the band's Majorettes. But you already knew that!

So you know all about Majorettes and what they do in the parade, but does your girl? She might not be old enough to sign up to march in the parade, but there are things she can do to get her career started at a young age. She can practice her moves in the backyard. And she can pretend to lead her group through the streets at the country's biggest parades and competitions. But she's going to need just the right costume to achieve Majorette perfection!

This detailed girl's Majorette costume has everything required to let her become a part of the group. It has all the serious style of a marching band uniform but with convenient costume styling and at price point that won't break the bank. A simple blue and white dress has gold trims and buttons for a timeless look. The coordinating hat makes the ensemble look super duper official, and boot tops complete the theme. She can add a baton (sold separately) to have all the equipment to start her Majorette career. Whether she's just looking for a fun and easy costume, or even if she's ready to start practicing her baton twirls in the backyard, we're sure she's going to love this marching band costume!