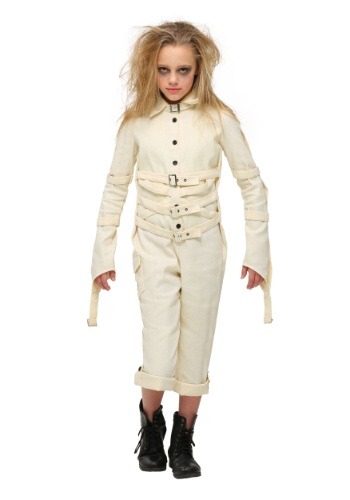 Don't call this girl "crazy." In fact, there is nothing "crazy" about her. She's just wearing a straitjacket! She wows crowds and makes them wonder how she could possibly do her spectacular tricks. Of course, it's just magic.

But magic needs the right look. Something mysterious and out of the ordinary.This young lady actually chooses to wear a straitjacket because she loves magic tricks. Yup, you guessed it, this straitjacket-wearing young lady is great at finagling her way out of these restraints in a matter of minutes. It's so mesmerizing that you won't believe your eyes. Not only is she wearing a straitjacket because she loves practicing magic, but this young magician also loves wearing white jumpsuits. Hey, they're kind of stylish, in a Harry Houdini kind of way. Everyone needs heroes, and he's a pretty good one. She's both a magician and a fashionista, just like Harry!

This straitjacket costume is a very versatile costume for girls who are looking to be something a little different this year. Of course, you can make this costume as spooky as possible or as magician-friendly as possible, it's totally up to you. Young magicians in training will love trying to work their way out of the buckles and buttons in order to stun an audience. We recommend paring some combat boots with this costume for a look that is anything but "crazy!"