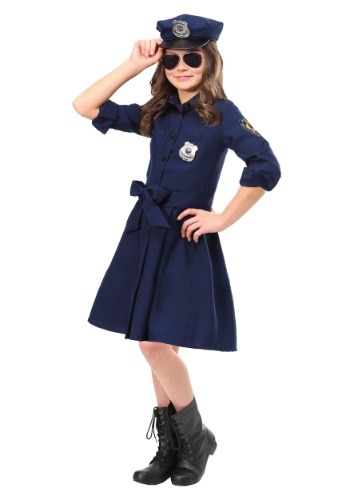 On the Cold Case

Until a year ago, your neighborhood was a peaceful, picturesque little community. But then a dark cloud began to darken the sweet little parks and school campuses. Old lady Alma, the grade school librarian, was the first victim. She was opening up the school library when she smelled something strange, something greasy. Some rascal had smeared cold cream all over the doorknob! And yes, this seems like a lame joke but it happened again and again.

Bobby came home crying with cold cream caked all over his brand new jeans. The ride down the slide had never been so fast and yet the cleansing cream's thick grease was alarming to the little boy who was naive to the world of beauty products. Your little girl had to put her foot down when her best friend, Carl, got a little surprise while digging in the sandbox. A handful of cold cream saturated sand is not a pleasant feeling.

Your little one will feel like a capable officer of the law when she's rocking this navy blue dress. The Made by Us ensemble was put together by our in-house designers. IT buttons up the front and has a sharp collar. The sleeves are accented with a Police shield. The waist is cinched with a blue tie belt. This sleek blue uniform is accented with two badge pins that she can pin on her costume herself. It's topped off with the structured police hat that'll make your little one look official from afar.

Your little one can question suspects for cold cream mischief with confidence when wearing this blue uniform dress. Pair the costume with sturdy boots and dark glasses to complete the costume. It won't be long until all the schoolyard mischief that's been stirring up around town calms down. No beauty product vandals are going to get away on this cutie pie officer's watch!