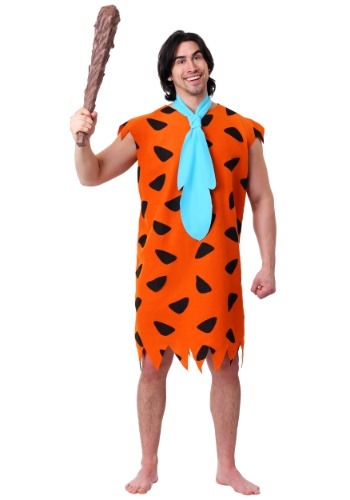 It’s quitting time at the ol’ quarry, so jump off of that dino-crane and head home fast because Wilma wants to pick up some bronto-burgers before heading to the drive-in to see the new monster movie! So get your feet on the ground and start kicking. Tonight's going to be a good night!

Now you can enjoy the blue collar caveman life with this fun Mens Fred Flintstone Costume! The knee length tunic is made of only the finest and most durable prehistoric animal pelt (actually, it’s polyester since prehistoric animals pelts are so hard to find these days) and printed with Fred’s trademark orange with black spots style. The included blue necktie will give you a business casual look that works well for when you have meetings with your boss, Mr. Stone, or when you are hitting the lodge after work with your buddy Barney for some bowling! Add a pair of caveman feet and a lodge hat for a look that’s ready for a night out! Whatever you end up doing, this costume will make sure you have a yabba dabba do-time!

Clubbing in the Stone Age

So, put on your animal skin and take Wilma dancing. Hey, maybe Betty and Barney will want to come along, too. It’s gonna be a great night out for the modern Stone Age family! Yessir, life in the town of Bedrock is pretty good for Fred Flintstone, except the tires on his car need to be re-chiseled and the garbage disposal has indigestion again. But even that won’t get his spirits down, at least until he’s getting ready for bed and it’s time to put the sabretooth cat outside...that never goes as planned.