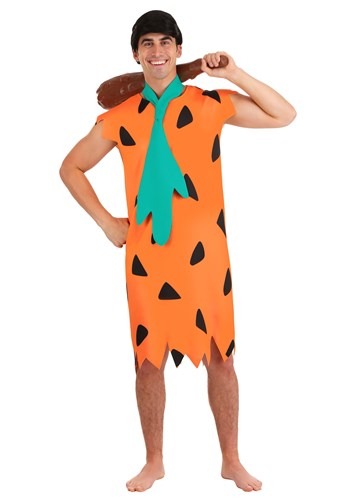 Ahead of His Time

Before Fred Flintstone became a geological engineer for Slate Rock and Gravel Company, he was a resort bellhop. The jovial caveman met his wife, Wilma, while he worked for the resorts and knew he had to come up with a way to gain her attention. What you see here, is the very first, dating-profile picture. We found it while out on a casual dig. It turns out Fred is the mastermind behind profile pictures... Further research revealed he came up with the idea when he saw Wilma checking out the decorative cave paintings that adorned the resort's lobby walls. There was a spark in her eyes that he knew could only be caught with an equally beautiful work of art. So, in stunning, stone-etched and clay-painted detail, Fred had his distinctive features recorded for posterity. He presented the stone slab to Wilma one evening as they were grabbing a drink, and well, the rest is history!

The discovery that Fred was the inventor of profile pictures, and the first to understand they could be used to gain attention, has brought him back into the public light. Fred was surely a man ahead of his time. So this Halloween, bring his legend back to life with this Fred Flintstone Costume.

This exclusive costume was inspired by the same stone slab Fred presented to Wilma. When you wear Fred's signature black-patterned, orange frock paired with his favorite teal tie, you'll resemble the stylish caveman himself. And since nothing says modern innovator like bringing back the simplicity of another historical era, this costume comes with just the 2 easy-to-wear pieces.

A thoughtful present and great wardrobe definitely helped Fred impress Wilma, but we believe there was something about his tall, dark, and handsome looks that helped as well. Take a good look at his heavy brow and shaggy hair. While Fred was surely an innovator when it came to dating, his classic looks easily helped him seal the deal. So when you're getting dressed up as Fred, make sure you give yourself the same carefree grooming and make Fred proud.