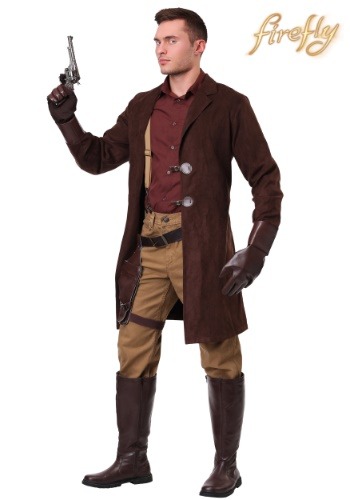 Sure, the Alliance might have seemingly won.  The Serenity appears to have been shot out of the sky.  But, all true Browncoats know the truth.  They're still out there, coasting in the sea of stars, trying to keep their grip tight on freedom... and maybe exposing some of the corruption and dark secrets of the Alliance while they're at it.  All it takes is for the rest of us to keep the faith and hold out.  "Firefly is never over."

But, until we can quell the Alliance, we still have to fight the good fight.  And how can anyone do that without a captain that has the creativity, the gumption, the nascent charisma to pull off anything!?  Well, half the crew of the Serenity would claim that they never had that kind of a captain, anyway, but Malcolm Reynolds would just offer his characteristic smirk and wait for his plan to come to full fruition... even if it means being stranded naked in the Isis Canyon of Bellerophon.

But, you won't need a devious plan like that to fulfill your role as the captain of the Serenity.  Our own team of designers survived the Reavers by unspeakable tactics just to bring you this officially licensed Malcolm Reynolds Costume from Firefly.  This exclusive look includes all the components of Mal's space-cowboy style:  his button up maroon dress shirt, loose-fitting faux leather belt (with a gun holster), matching gloves, and contrasting suspenders.  And, most importantly, you'll have a faux leather duster — a literal browncoat — with custom clasps to finish off your Firefly look.

THEY CAN'T TAKE THE SKY FROM YOU

It might have been an uncomfortable number of years since we saw the Serenity soaring on air, but that doesn't mean it isn't still alive in your heart.  This Malcolm Reynolds costume is just the way to show your Browncoat love and keep Firefly alive for the next generation.