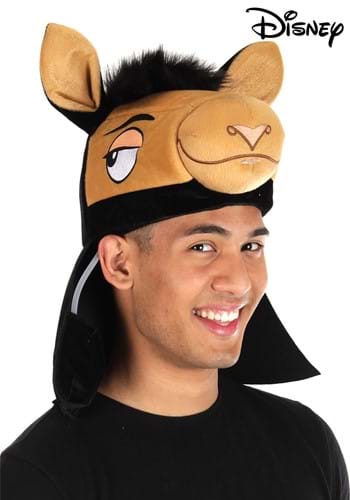 If there’s one thing we can say with 100% certainty, it’s that Emperor Kuzco is one sassy individual. He’ll even draw you a diagram of his sass from infancy to the unfortunate llama incident, just so you don’t mistake his personality for any other defining characteristic. And, if you’re thinking about dressing up as the emperor to honor him in some way, he’s going to insist that you stick to his very curated, personal brand. In case you need a little help with that, we have this Emperor’s New Groove Kuzco Sprazy Hat that’s a guaranteed method for sharing some Kuzco, llama-level sass.

Polish off your costume with this costume accessory! Designed to look like Kuzco at his finest this plush headpiece transforms you into the llama-emperor with a soft-sculpted muzzle, ears, and black cowl that stretches down the length of your neck. Embroidered facial features capture Kuzco’s signature look while a hidden water reservoir is where the power of Kuzco’s personality lies in wait. Simply load the reservoir and squeeze to release a squirt of water up to 25 feet across the room. If anyone throws shade your way or disrespects the emperor’s need to exclaim “Boom, Baby!” after every pronouncement will learn better (and to keep their distance) in short order!

Whether you’re visiting a Disney theme park to enjoy some summer fun or donning the royal garb and privileges of your favorite llama for Halloween, this Emperor’s New Groove Kuzco Sprazy Hat is a must-have! Keep cool in the heat with the spray feature and capture that sassy emperor’s personality perfectly whenever you wear the officially licensed accessory!