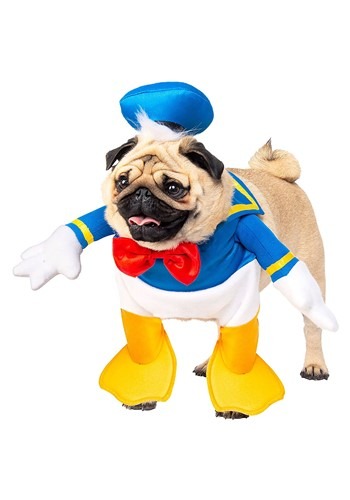 So, you want to dress up your precious pooch for your next costume party. There are lots of options, but there aren't many that make more sense than an iconic Disney character that everyone recognizes... Someone who's best friends with ringleader Mickey Mouse... Someone who is a natural fit for dressing up a dog...

Make a splash at your next party when you dress your dog up in this Donald Duck Dog Costume. The officially licensed costume is 100 percent polyester and looks just like Donald's famous outfit from the classic cartoons. The blue sailor shirt features yellow trim and has a hook-and-loop fastener at the back of the neck. It also includes stuffed arms sewn into the shoulders. It also features Donald's famous red bowtie. Meanwhile, the white bottoms can slip over your dog's front legs and even include yellow duck feet like Donald's. Finally, there's a jaunty blue sailor's cap with an elastic chin strap for easy wear.

Transform your dog into a classic Disney character with this Donald Duck Dog Costume. If you want to take your party to the next level, we recommend also dressing up your cat as Mickey Mouse and your parakeet as Goofy.