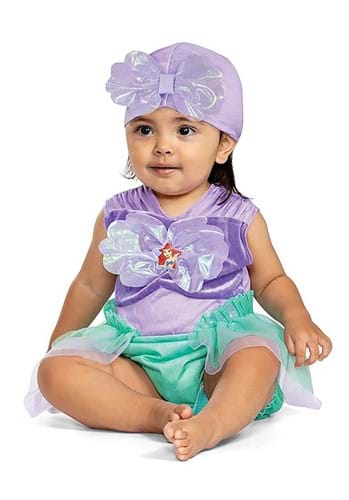 Part of Your World

Wow, Scuttle was right. Human beings are so interesting - and so odd! You've amassed a collection of people things and you know they're not doing it right. Why are they using their dinglehoppers to stab food and eat it? Everyone knows that they're meant for combing out your hair. Also, how come you haven't seen a snarfblat anywhere? You'll just have to grow a pair of human legs, come out of the water, and teach them how to use all of their stuff properly.

Your little one will be the cutest underwater princess around when she wears her officially licensed Disney The Little Mermaid Posh Ariel Costume! A sweet velour onesie has a purple top and a seafoam green bottom with snaps at the crotch for diaper access. Fishy ruffles and floaty mesh panniers decorate the hips, while shiny shell cutouts and a star-shaped cameo of Ariel decorates the chest. The costume includes a cute purple cap with an iridescent bow designed to look like another pair of shells.

Under the ocean's surface, a pretty, plucky mermaid is waiting for adventure! This outfit is perfect for your little one who loves bath time, has a spirit of adventure even bigger than she is, and wants to try walking on her - what's that word again? - Oh, feet. Dress as King Triton or Flounder to form a family Halloween costume, or let your baby star in her very own show. She's more than capable of besting Ursula with just the power of cuteness alone.