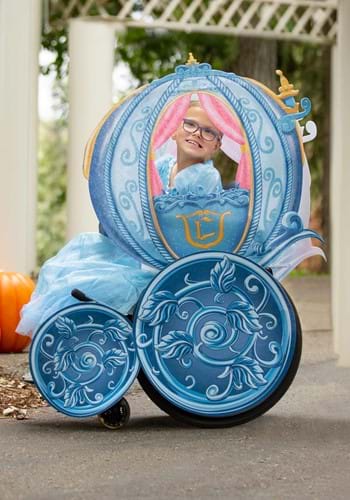 Have Courage and Be Kind

It’s certainly fun to listen to and imagine stories about superheroes and warriors. Most of us think it’s pretty awesome when a character is really strong. However, some people’s strength is mental rather than physical, and that doesn’t make them any less heroic! Cinderella is a strong-willed person who always strives to be kind. Many others in the same circumstance as her would quickly become bitter and mean, just like her stepmother and stepsisters. However, she’s not a pushover. She also stands up for herself and tries to get out of her horrible situation, but she just needs a little bit of help. When Fairy Godmother turns a pumpkin into a carriage for her, she gets to fulfill her dream of going to the ball. Getting to dance with Prince Charming is just the cherry on top!

If you need a ride to the ball, make it more magical with this Cinderella Carriage Adaptive Wheelchair Cover Costume. It’s made of stiff printed felt and comes with plastic pieces to keep it in place. Rest assured, no pumpkins were harmed to make this costume! And there’s no need to borrow your fairy godmother’s wand to assemble it—it comes with everything you need and instructions to put it together. The windows on both sides and open front allow for plenty of visibility and minimize restriction. You’ll be able to wave to everyone on your way to the ball!

Dance the Night Away

This Cinderella Carriage Adaptive Wheelchair Cover Costume is just the thing to get you to the ball before midnight. And even better, if you don’t quite make it by then, it won’t turn into a pumpkin and fall apart when the clock strikes twelve! Pair it with a Cinderella costume to really feel ready for the ball, or DIY any outfit that you think the lovely princess would wear. And if you want to add an extra magical touch, make it a group costume and include Prince Charming, Fairy Godmother, or even a mouse friend or two!