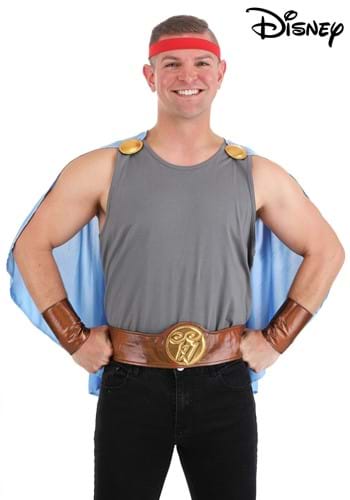 Taking You to Task

Hercules had a lot to prove. He knew he belonged in Mount Olympus! Unfortunately, the drama of the gods landed him in the hands of mortal humans. In the end, there was a compromise. Hercules had to complete 12 labors. And these labors, they were hard! He had to slay a nine-headed monster named Hydra. He had to capture the bull that had given birth to the famous, dangerous minotaur. And finally, he had to return Cerberus, the three-headed dog from Hades to Olympus. Basically, Hercules had to face down a lot of many-headed monsters! Lucky for you, you don't have to complete any tasks to take up the famous Hercules persona. Well, only one. Purchase this Hercules kit. Once it arrives, everyone will assume that you've already been to Hades and back, playing dog-catcher.

This kit includes a headband, a pair of faux leather gauntlets, a belt embossed with a golden lightning bolt, and a flowing blue cape. The belt easily secures around your waist with a strip of hook and loop fastener in the back. Pair this set with a tunic and gladiator sandals and you'll look like you just popped off an ancient urn, into real life. Good thing too, we could use a few more old-school heroes!

What is it about the ancient Greeks? So many of their characters are still everyday, household names. Maybe we like their characters so much because the style in ancient times was pretty cool. Who wouldn't want to drape themselves in togas and rock wrap sandals? If you want a timeless costume, Hercules is a great choice. That way, when you're telling stories about this Halloween to your grandkids, your grand epic won't be interrupted with questions about who Hercules is. Good thing too, the tales of your grand labors deserve to be heard!