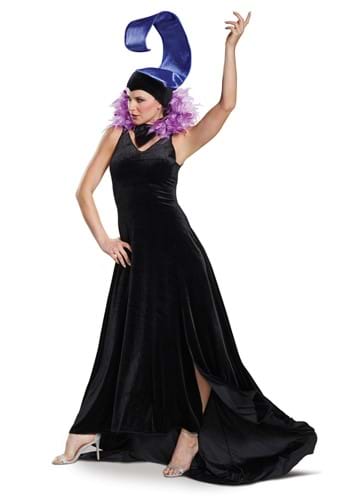 Smash it With a Hammer!

When it comes to villains, Yzma's got it all! She's got a knack for show business, fashion, and designing a lab combined with an amusement park. Why wouldn't you want a woman like this running the empire? It would be non-stop amusement at all times. A woman this shrewd would never allow herself to be turned into a llama! She has a couple weaknesses, of course, she's not the most efficient when it comes to plans. When you're taking down an emperor you just don't want to depend on the postal service. Though her original idea does let her use another of her magnificent talents. She wields a sledgehammer better than any villain we've met before! If she did things all over again, perhaps she would have utilized that talent more often instead of using so many vials of potions. This Halloween, give the empire takeover one more chance with this lovely villainous look.

You'll feel like you're ready to rule the Kingdom in this sleek black dress with its sparkly ruffled collar and dramatic silky headdress that is structured with wire on the inside to make sure you always arrive in avant-gard form. To make this look complete, make sure that your eyelashes are as dramatic as you can get them. Yzma wouldn't have it any other way!

Getting Into the Groove

When you're wearing this licensed Emperor's New Groove Yzma costume, it'll be easy to get into character. Want to take it one step further? Make it a group costume and invite Kronk and Pacha along. Hey, maybe you'll even let Kuzco come along as long as he's in llama form. You've got to maintain your position on the throne, after all!