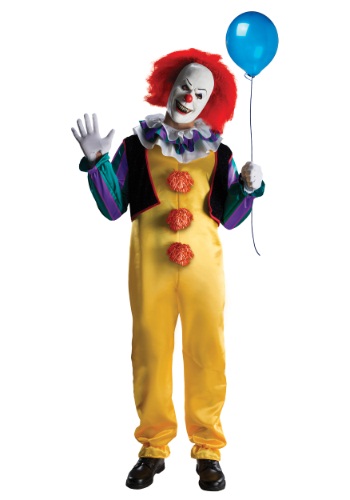 IT Pennywise Costume For Pets
$24.99
Add

Why is it that even though all clowns want to do is spread fun and silliness to children everywhere, they are usually seen as horrifying? Oh, right, probably because of this guy!

We know Pennywise isn't really a clown. It's a mind-reading monster that becomes what you fear most before attacking you, but that just means kids were already crazy-scared of clowns before Pennywise even showed up! Actually, the condition is known as Coulrophobia, which kinda sounds more terrifying than clowns themselves, and there are a bunch of theories for what causes it. Like maybe you saw a particularly bad clown when you were a kid and it turned you off to the whole thing forever, or maybe you just don't dig clowns and there is no reason! But one thing that is pretty consistent is that if you want to make anything extra-creepy, throwing a clown into the mix is going to do it.

So if you are going to a costume party (or the annoying neighbor kid's birthday party) and you really want to make a lasting impression, this Deluxe Pennywise Costume is going to help you pull it off! Modeled after the classic killer clown from Stephen King's "It", this one-piece clown costume has all the hallmarks of a silly, fun-loving clown, like bright colors and fluffy pom-poms. But then the included creepy clown mask will have your friends' skin crawling faster than you can say "You'll float, too!" We recommend bringing balloons to hand out as keepsakes to the other party goers so they can remember all of the fun you spread!