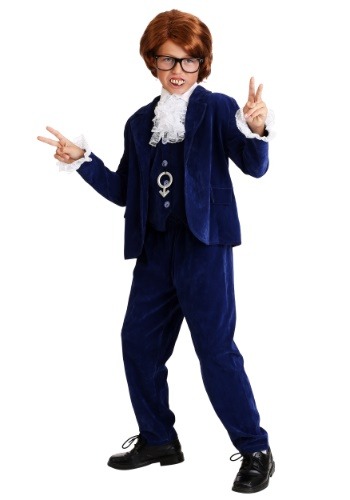 Have you ever wondered how international men of mystery get their start? We know how they ended up in the 90s. But what about when they were children? Did they always dress so ostentatiously? Were they always so good with the ladies? Or did they have horrible acne? No girl wanting to go with in ten feet of their pizza face. Were they bullied by the bigger kids at school?

As a kid it was always better to watch the movies that grown-ups liked. So, it's not surprising that our kids like to watch stuff that we aren't sure they should be watching. But hey, we watched it at their age, and we turned out fine. (Fine-ish.) Beavis and Butthead didn’t warp our young minds. And a silly spy movie from the 90s isn't going to warp their impressionable minds. It may make them say "Zip it, zip it good" a lot however.

So, this Halloween when your kid asks to be a swinging spy, hand them this Deluxe Child 60s Swinger Costume. They will be ready to fight a bald evil villain. Be cryogenically frozen for 30 years, and still be the coolest (no pun intended) guy in the spy world. Your kid will be able to pick up the cute girls in his 4th grade class, and nobody will be willing to bully someone this groovy. Who knows, maybe when he grows up he will be a real spy. We just hope he doesn’t start saying any of the hilarious, but also awful pick-up lines that are featured in spy movies, like "Ooo behave, baby".