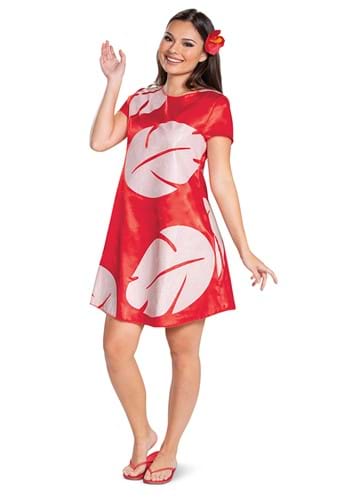 Do you think that after learning aliens do exist and can live among us, Lilo stayed in Hawaii? Did she maybe take a trip to space with Stitch? Visit all his cousins? Maybe she toured the continental United States with her blue buddy and discovered other extraterrestrial blended families—hers couldn’t be the only one. Or perhaps with help from Stitch, Nani, David, Jumba, and Pleakley, Lilo became the number one hula dancer, surfboarder, and alien researcher. She’d be a major star! Multifaceted and full of imagination, social media wouldn’t stand a chance! Lilo and Stitch would be internet stars for their antics, talents, and smarts! It could happen! After all, an alien crash-landed on her island, got run over by a truck, and lived to cause adorable chaos another day.

So, however you imagine Lilo’s story unfolding after the Disney film cuts to black, bring it to life with this Deluxe Adult Lilo Costume!

This officially licensed costume comes with just the basics. Turn into the grown-up Lilo in the shimmering red dress inspired by Lilo’s iconic outfit. The same leaf pattern and short-sleeve cut make this playful shift dress easy to recognize. Add the included flower accessory to your hair for a polished look! The two-piece costume is simple to wear and offers you the freedom to update or stick to the original Disney character. Pair with leggings and tights for a cozier vibe on Halloween, or leave as is for some warm weather fun that Lilo would approve of!

Celebrate your favorite Disney character with this Deluxe Adult Lilo Costume! Put together a Lilo and Stitch group costume with your friends in Stitch jumpsuits or hula ensembles. Or use the simple look to update your Disney-bound wardrobe. Whatever the need, this costume has you covered!