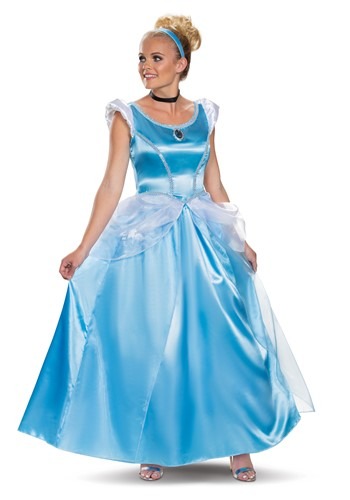 How does Cinderella do it? We wanted a dress, just like the one that she wears. So, we did what any rational person would do... we tried to make friends with all of the woodland animals that live near us. Unfortunately, the animals haven't been great at dress-making. In fact, most of them just scurry away from us every time we ask them to help us make a dress! After that, we tried contacting our godmother, but she claims that she isn't a fairy and she also told us that she doesn't have any magical powers. We were at our wit's end... but then we found out that you can just get this Deluxe Cinderella Costume! It gives you the magical look without having to make friends with local woodland animals and you don't even need to contact your godmother (fairy or not).

This women's costume is officially licensed from the classic Disney film, Cinderella. The costume comes with a brilliant blue dress, just like the one worn by Cinderella in the movie. The bust has a faux blue gemstone in the middle and the white accents on the shoulders add an elegant touch to the look. The skirt has white tulle accents to give it an ethereal aura. It also comes with a black choker that fits around your neck and a blue headband for your hair. Put it all together and you'll get an amazing look that's much better than anything a few songbirds could make!

You might not be able to get the woodland animals around you to make your dress, and most godmothers lack any real fairy powers, but with this officially licensed dress, you won't need either of them! You'll get a great Disney look with ease!