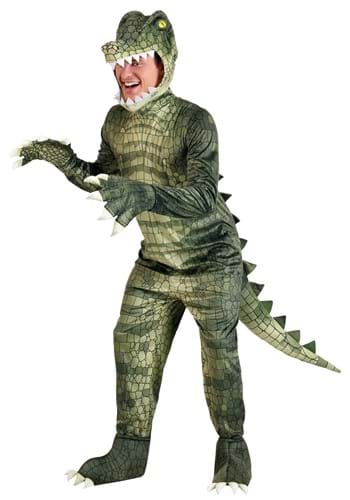 You've heard the phrase before: 'see ya later, alligator.' Well, did you know alligators aren't fond of it? In fact, they don't like it at all. Why is everyone always saying 'bye,' to them? It's actually one (of the many) reasons they're so cranky. Sure, they have all those sharp teeth without any dental insurance. They don't even have a trusted toothbrush and toothpaste for brushing for that matter, but that isn't the main reason for their constant crankiness. They have a cantankerous disposition because everyone is always leaving them; not just turning around and walking away, but running for the lives! That's not cool, man. We completely get it though. Honestly, if we saw an alligator walking down the sidewalk, we'd do the exact same thing. Those teeth and claws are frightening! And don't even get us started on that spiky tail. They're like modern-day dinos and the sight of one would make us say, 'see ya later' too but this alligator costume is attempting to change all that. Sure, it's called 'dangerous' but it's actually pretty inviting. Just you wait and see.

The Made by Us jumpsuit is the perfect disguise for grown-ups who want a disguise that's equally ferocious and friendly. The high-quality Alligator costume has attached mitts with plush claws as well as a soft tail attached to the back. The shoe covers match the jumpsuit and complete the look. Finally, the hood fastens underneath the chin with a comfortable Hook and Loop fastener tab while faces stick through the middle, surrounded by jagged felt teeth.

Snap Out Of It

Wear the exclusive alligator costume and decide if you want to snarl or smile. The choice is yours! If you smile, prepare for people to say "hey-ya alligator" instead of "see ya later alligator!"