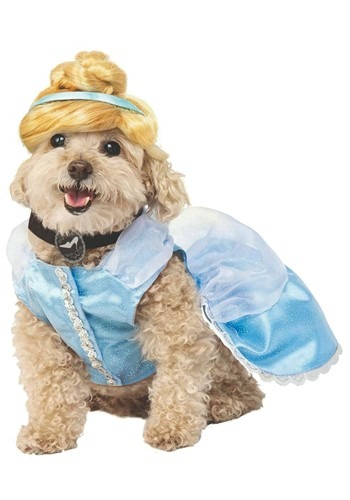 ...there lived a sweet little Cocker Spaniel named Ladybug. Ladybug's owner married a lady with two dogs of her own, and Ladybug was so excited to have a new family. But tragically, Ladybug's owner died. Now, Ladybug had to live with her step-owner and her two step-sisters, but they all hated Ladybug. They made Ladybug stay outside in the doghouse while the two other dogs got to stay inside, and they didn't share any treats with her. They also started calling her Cinderpuppy, just to be mean.

One day, the local Kennel Club announced that there would be a dog show, and anyone could attend. The prize would be a lifetime supply of kibble! Cinderpuppy really wanted to attend, but she didn't have a new collar, which was a requirement. Her two step-sisters got to buy lovely collars, and they headed off to the dog show. Cinderpuppy just sat outside her dog house and sniffled... until suddenly, her Fairy Dog-mother appeared! The Fairy Dog-mother waved her wand and transformed Cinderpuppy's old torn-up collar into a beautiful new one, along with a beautiful evening gown, just because.

Now your beloved dog can be the belle of the dog show (or maybe just the costume party) just like Cinderpuppy with this Cinderella Dog Costume. The officially licensed outfit is 100 percent polyester and fastens under your dog's belly. It looks just like a beautiful blue ballgown, complete with rickrack and sequin details. There's also a beautiful black collar with a glass slipper emblem on the front, along with a blonde styled wig that has an adjustable band for easy wear.

With Cinderpuppy's new collar, she was able to go to the dog show after all... and she won first place! Not only that, she was adopted by a new owner, who loved her very much and showered her with treats. Dreams really do come true!