Girl's Wasp Costume from Marvel Ant-Man and the Wasp 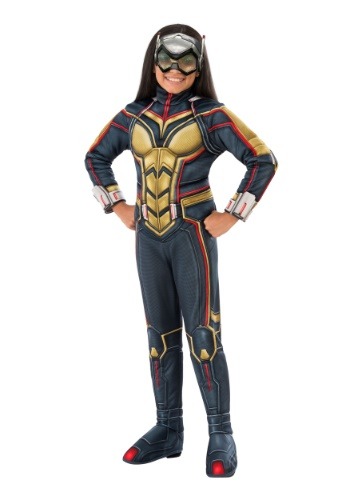 You saw Ant-Man and the Wasp, right? We did and now, we’re sort of wondering if we even need Ant-Man anymore. Hope van Dyne is a better fighter than him. She’s smarter than him. She has all of the same superpowers as him when she’s in The Wasp suit—actually, she has MORE powers than him, since her suit has wings. Let’s see, she also looks cooler than him in the suit. If Ant-Man had the smarts to call her up during that whole Civil War fiasco, he probably wouldn’t have gotten caught in the end. Well, even The Wasp needs a comical sidekick, right?

We’re pretty excited that The Wasp is one tough cookie, because that means your little girl has one super-awesome superhero to look up to this year. She can even dress up as her this Halloween when she wears this child Wasp costume.

This child Wasp costume looks like the suit worn by Hope van Dyne in Ant-Man and the Wasp. It's a dark blue jumpsuit that has plenty of details from the movie. Printed yellow armor decorates the front and red outlines along the chest, arms, and legs add a pop of color to the outfit. The legs end in boot covers that can be worn over most pairs of shoes. To finish it all off, the eye mask has a visor that fits over your child’s face with an elastic band.

Your child will be ready for any kind of espionage mission in this Wasp costume, whether that means a round of trick or treating or it means heading to the quantum realm. Be sure to check out our Ant-Man costumes if you want to give her a little bit of backup, but who are we kidding? She’s not going to need any backup!