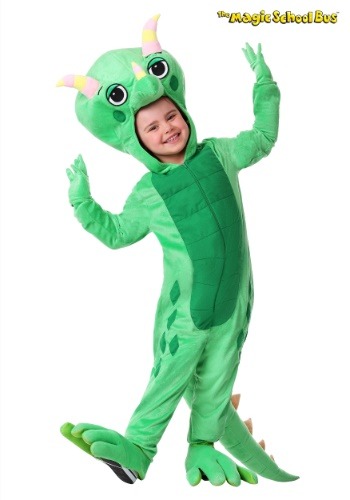 The Magic School Bus is populated by a whole bunch of really freaky, funny, and friendly characters. No matter what adventures they are going on, those kids know that they can depend on Ms. Frizzle. But, who can the teacher who has the wackiest lesson plans in the world depend on? Well, she can hardly go anywhere without her best pal in the whole world: Liz, the Jackson's Chameleon, devourer of bugs, stepper of peddles, and even the first character ever on screen!

This delightful critter might defy several expectations of the real world. She's got horns, which female chameleons don't have... and she also has a little bit of a fear of bugs, even though they are her favorite food. But, the fact that she knows how to get a magic bus up and running and only gets to talk when she's narrating the behind the scenes moments is what really shows that Liz knows all the secrets of the universe!

Feel some serious fun for yourself and your kiddo when you go on your own adventure with this officially licensed Liz costume from The Magic School Bus. This full jumpsuit is a delightful multicolored green to simulate the belly scales and darker scale patches along the leg and face. The pull-up hood has Liz's curious face and triple horns. The gloves are attached to the jumpsuit and the shoe covers feature Liz's four toes, while the stuffed tail in the back finishes off the look. Now you just need a Ms. Frizzle costume... unless your kiddo learns how to start the Magic School Bus, anyway.

The Honourable Liz Ard might technically be cold-blooded, but your kiddo is going to be warm and fuzzy in this exclusive Liz costume from The Magic School Bus. Just remember to keep your tyke well-fed, though we'd recommend candy instead of bugs.