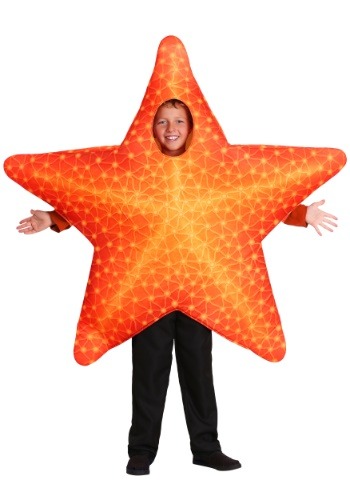 There's a popular saying, you've probably heard it before, "there's plenty of fish under the sea." It's a common phrase used to cheer people up who are looking for love because it's uplifting. It implies there are more worthy suitors out there, you just have to get out there and find them. Sure, we agree with that, there's plenty of fish under the sea, but there are only a few starfish and starfish are the cream of the crop. Other fish want to either be them or be with them because it's not a coincidence this species is given their name, 'starfish.' They're under-the-sea celebrities! Starfish are gregarious, hilarious and over-the-top. The star-shaped echinoderms are naturally dramatic because they have to live up to their name. You'll never meet a boring starfish, that's for sure!

If you know a boy or girl who's a natural entertainer, making people laugh and smile all the time, the child starfish costume is a perfect choice. You can't miss the kid who's walking around as a larger-than-life aquatic creature, at least not one who's this cute!

The child starfish costume is a Made by Us design so it's high-quality and expertly made by our team of talented designers who studied the workings of a starfish for months before producing this gem of a disguise. The star-shaped costume is bright orange and printed with suction cups to look textured. Conveniently, there are holes for the legs, arms, and face. Put it on by placing it over the head and begin life as one of the ocean's most curious creatures.

When kids are dressed as a starfish, they'll want to have a crew of tank mates around them at all times. (They need an audience to perform for!) Check out all of the Made by Us aquatic costumes so your little starfish can be surrounded by finned friends this Halloween.