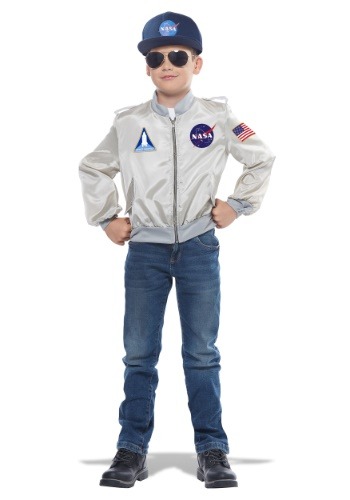 Houston, Do You Read?

In his mind, your kid has just come back from his first mission to Mars. And it was incredible! He was actually the first human to set foot on the red planet, thanks to a new special space suit and highly-developed new technology (which he also helped to invent, btw). Wow, those are big accomplishments for such a little guy. NASA is lucky to have him!

To keep him dreaming big and help his imagination to grow, give him this Child's NASA Flight Jacket to sport around town in between missions (we hear he's headed to the moon next to try to transmit the first text message emoji). This astronaut's day-off look is casual-cool and a real conversation starter, so he can regale Mrs. Finniker next door with his thrilling accomplishments, or tell his teacher, Mr. Geebs, all about what life is like in outer space. This outfit will make a super-cute costume for Halloween, too, but then again, so will his specialized space suit if he can get NASA to send it!

This official-looking outfit includes the jacket and hat, both emblazoned with the NASA logo. The silver jacket is made from a sleek, spacey-looking shiny material and also features authentic patches printed atop. Have your kiddo add a pair of aviators and his best pants and boots for a look that says, "Yeah, I've been to space. And I'm going again. NBD."

Loud and Clear, Over

After trick or treating, and show and tell, and all the other obvious occasions come and go, your kid will still reach for this jacket any time he wants to feel special. We hope he keeps going on missions to Mars and beyond, and that NASA eventually calls him to join the flight crew! He certainly has the passion for it.