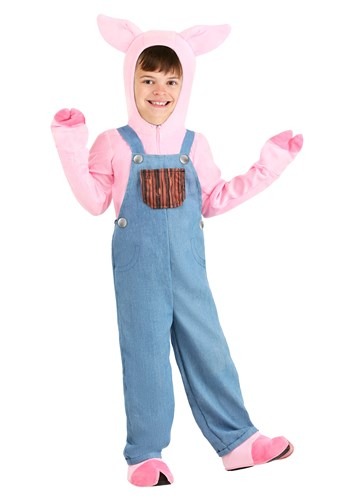 At school, your child has been learning all the classic children’s stories. At circle-time and during reading lessons they’ve become huge fans of Jack and Jill, Little Red Riding Hood, and Hansel and Gretel. Every evening, instead of listening to a new tale, your little one recounts the story of the day and the messages they learned—in vivid detail. Then, one day, they came racing into the living room and announced they would be a little piggy for their class’s performance of The Three Little Pigs.

Wanting to impress their classmates, your child began preparing for their big debut. They read and re-read the story and practiced each pig’s lines whenever they had time. While brushing their teeth they practiced wiggling their nose, so they were ready to really sell their piggy performance. At playtime, they’d build little houses and check to see if the structure was sound. With their character fully developed, the only thing they need is a costume that’s as ready to perform as they are!

This Made by Us Kids Little Piggy Costume is just the thing to get your kiddo ready to take on the role of a lifetime. Dressed in the soft, hooded-sweater, they will transform into one of the Three Little Pigs complete with soft-sculpted pig ears and attached pig-mittens. The overalls are designed to look like denim but keep your kid comfortable while they build another little house. Featuring 3 interchangeable pocket pieces, they’ll be free to choose which material they think is best to keep the Big Bad Wolf at bay. A pair of boot covers finishes the charming costume with pig feet, so your child’s sneakers don’t blow the whole thing down.

Let your child put on their own performance of their favorite fable with this exclusive Little Piggy costume for kids! They’ll be ready to portray all 3 piggies with just the 1 versatile ensemble. The only thing they might need is a friend or family member to don a Made By Us wolf costume and fill that villain’s role.