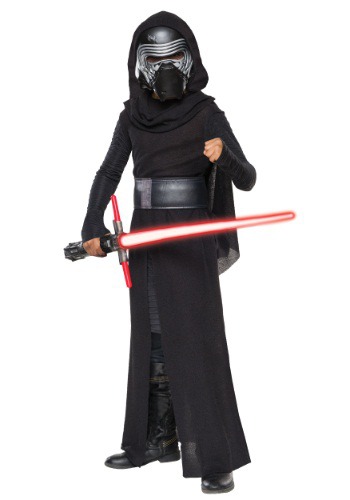 He's following in the footsteps of his evil grandfather (apparently evil skips a generation). His powers, although not properly finished in Jedi school, are still awe-inspiring and... evil.

For crying out loud, the guy can stop a laser bolt with the force and then calmly hold a conversation with a captured rebel! Did we forget to mention that his interrogation force powers are insane? Well, except they don't work so well on his new arch-rival, Rey, but we'll hopefully find out more about that later on in Episode VIII, IX, and probably X. Ren is a little quick to anger along with a few other flaws, but he's strong and scary looking which is exactly what we like in a villain, AND a Halloween costume.

This Deluxe Officially Licensed Kylo Ren Costume comes complete with mask, robe, and belt. It will have your little Sith lord ready to lead the First Order and rule the galaxy, crushing the resistance, or you know, just playing outside in the backyard. Just be sure to get him a lightsaber as long as he doesn't throw any fits of rage in the house around the fragile decorations, it'll all be fine. Dads should be sure to keep their distance around this guy as his track record around fathers isn't the greatest. But have father/son relationships EVER been good in the Star Wars universe? We've got Luke and his father before this and then we had Anakin who never even had a father! On second thought, we think you're going to break the mold because Dads should always have fun with their kids, even when your son is an evil Sith Lord in this kids Kylo Ren Costume.