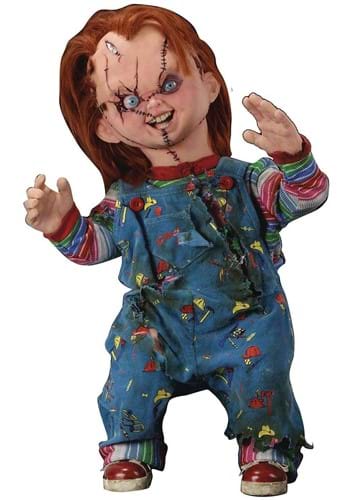 Generally, we advise folks to avoid jumping into powerful voodoo magick unless they have very clear guides. Believe us, while Voodoo for Dummies is a pretty solid introduction for some, unless you've got a powerful artifact like the Heart of Damballa, we wouldn't try anything. Those magical phrases are hard to pronounce, even if you're fluent in creole languages. Charles Lee Ray might have had a good teacher, but he should have studied harder. (And probably respected Damballa more, too!)

Chucky's failure will be your reward, however. Now you can celebrate the horror (and occasional comedic timing) of the Child's Play series with this officially licensed Bride of Chucky Replica Chucky Doll. After the sweet Tiffany did all the work to sew this guy together, you'd think that the magical chants would have worked. Fortunately for the rest of us, all it did was make this detailed replica look pretty darn convincing. We're sure you'll love bringing a smile and occasional horrific stare to your home with this inanimate doll. (Again, for emphasis: inanimate.)

Keep the Ade Due Damallas Quiet!

While this officially licensed Life Size Chucky Doll is pretty convincing and definitely not containing the soul of a serial killer, we still advise you don't go uttering magical phrases around him. Nothing would happen. But, you never know...