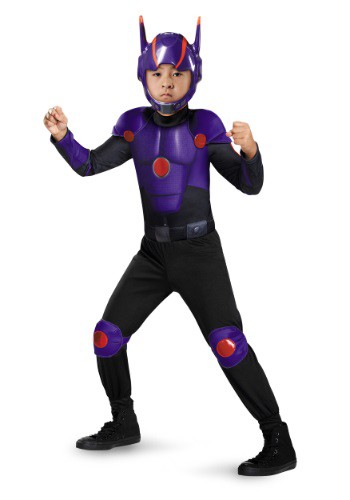 Why should your kid have to wait for nanotechnology and robotics to catch up with the movie? Sure, there's no San Fransokyo, but with this costume, he can put his science brain to work and form his own Big Hero 6, together with his best robot bud, Baymax. No, not Betamax. We thought that at first too. Slight tangent: isn't it weird that your kid will probably never bother with VHS tapes? And if you ever reference Betamax, he'll say "No, the big inflatable robot is Baymax, silly. Betamax isn't a thing." And he'll be right, because Betamax really isn't a thing anymore (is it? Maybe for some oddball collectors out there). And you'll look up from reading this and your kid will have an iPhone 20 installed in his eyeballs already and you'll be talking to him but you know he's not really listening because instead he's watching Big Hero 6 again, which he knows by heart, but what are you gonna do? This is the super scientist you've raised, and at least he's not using his genius for evil, right? RIGHT?

Our point is (we have a point), technology changes pretty fast, so give him a jump on things by letting him live in the future before it's here. You might not know your microbots from your micro-neural transmitter, but you don't need to. He does! And you know why you should foster this technological creativity now? Because soon, sooner than you'd like, you're not going to know how to use your iPhone 20 and who's going to show you how to use it? That's right, your very own Hiro Hamada, still obsessed with fun science technology and now the founder of a billion dollar startup. Hey, might as well dream big, right?