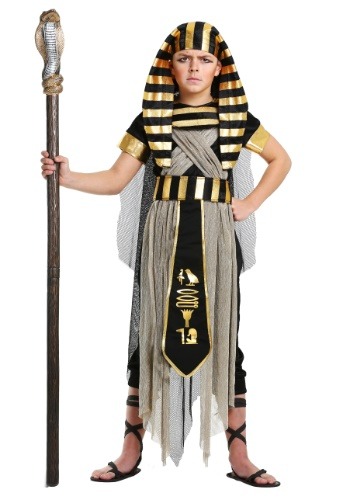 Guess what? There's a new Pharaoh. He's the coolest dude around. Some say he's a little too young to be king, but it's his birthright, and they'd be wise to fall in line and worship him as their leader. And guess what's the biggest surprise of all? It's your boy! He's the new Pharaoh!

First step's first, we're gonna have to get him the right costume to become the supreme leader of ancient Egypt. (Of course, the second step is going to be building those pyramids in his honor, but we'll get to that later.) If you're shopping to get him the threads to fulfill his Egyptian destiny, look no further that this HalloweenCostumes.com exclusive look.

This costume might not be 100 percent historically accurate, but it's a darn tootin good representation of how Pharaohs are depicted in film and pop culture. And that's going to be good enough to get your kid started in the Pharaoh game! This classic ensemble includes all the gear needed for him to give it a go.

The black bodysuit gets covered with a shimmering wrap and mesh cape, and vertical striped belt with hanging screen-printed extension gives this costume some serious ancient Egyptian style. When he completes the look with horizontally striped collar and Egyptian headpiece, he'll have his King Tut style locked in.

Just equip him with one of our Egyptian staffs (sold separately), and he'll be able to oversee all the folks building his brand new pyramids. Yup, he's going to love his new turf in the Nile, and we're sure the people are going to revere him. All hail Pharaoh (insert your kid's name here)!