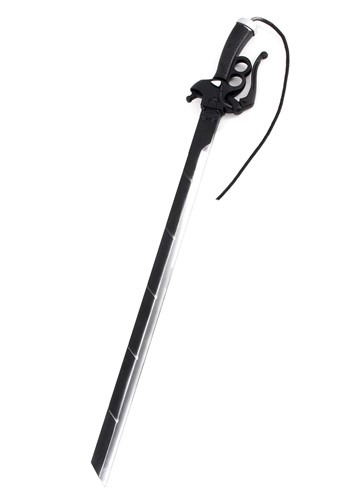 Titans are real jerks. You know how it goes. One second, you're just hanging out, eating some potatoes with your pals. The next second, you got a Titan bashing through the walls, wreaking havoc, trying to eat everyone for dinner. Not cool, Titans. Not cool. Well, if you're like Eren Yeager and his fellow Survey Corps operatives, then a Titan on the loose means it's time to get to work! Among their many tools to take care of Titans, they each carry their own set of ultra-hard steel blades, the only thing that can bring one of those nasty Titans down!

Of course, this officially licensed Attack on Titan Sword isn't made with the same material as the advanced weaponry from the anime series, but they recreate the iconic look with amazing accuracy.

This replica blade brings you a toy version of the weapons used by Eren Yeager and the rest of the crew from Attack on Titan. It has a rigid core and foam exterior to give it a light, yet solid feel to it. It's a must-have item for any Attack on Titan cosplay and it doubles as a great addition to any anime collection.