All About Dinosaurs and Fossils 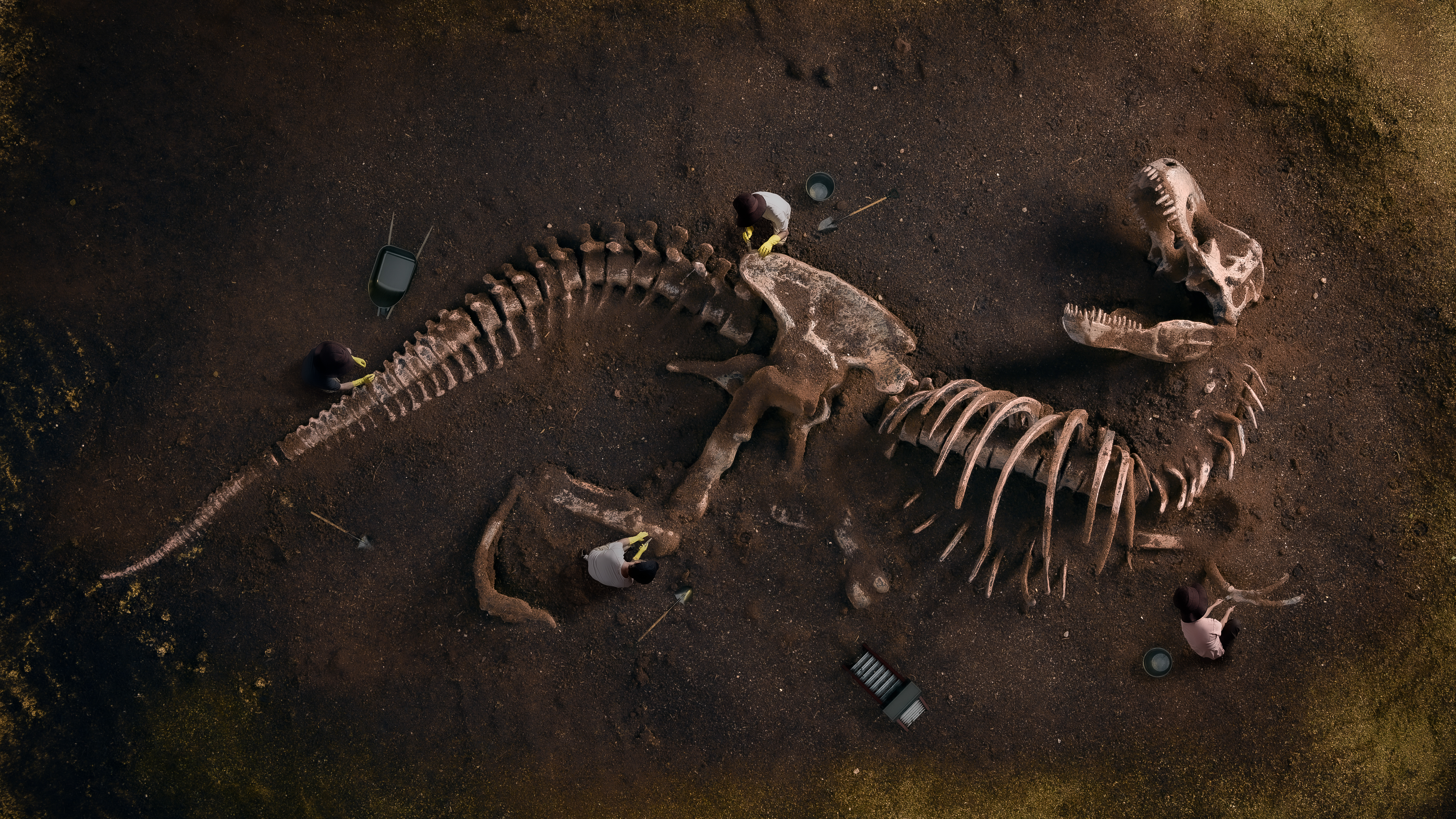 It's a well-known fact that long before humanity came along, dinosaurs ruled Earth. What many people don't realize, however, is that it truly was the entire planet. Dinosaur fossils have been found on every continent around the globe, even deep within the frozen landscape of Antarctica. While the majority of them have been discovered in Argentina, China, and North America, there may be dinosaur fossils buried deep below where you are right now.

What Is a Fossil?

A fossil can be any form of preserved remains left behind by a once-living organism from a former geological era. Most people associate fossils with dinosaurs, but the term can be applied to the remains of any animal or plant that was once alive. Some of the most common examples of fossils discovered include shells, bones, imprints, and even organisms preserved in amber like the iconic mosquito from Jurassic Park .

How Are Fossils Formed?

Most fossils are formed when an animal dies and is very soon after covered by sediment. As the buried body decays over time, it leaves a lasting impression in the ground that's eventually filled with rock. However, this is just one of several ways that fossils can be formed. Fossils come in a variety of types, and the way they're formed varies.

Mold and cast fossils are the most common types of fossils and are usually what people imagine a fossil looking like. They're created when the remains of an animal or plant are buried and, over the years, leave an impression deep within the ground. This impression is slowly filled with minerals over time that eventually turn to stone and leave behind a cast of the skeleton. These types of fossils are the ones commonly put on display in the form of dinosaur skeletons.

Here's a step-by-step look at exactly how mold and cast fossils are formed:

While animal skeletons preserved in the form of mold and cast fossils are the most common type, entire animal fossils have been discovered as well. These whole animal fossils are created when the animal either becomes frozen in ice or trapped inside tree sap, which then turns to amber over the years. Both of these processes preserve the animal just as it was when it became trapped and not just as its decomposed remains. Several insects have been found preserved in amber, and paleontologists have even discovered woolly mammoths frozen in ice.

Another type of fossil is petrified wood. This is wood that has turned into stone over the course of millions of years. Though the exact process by which this happens is still being researched, it's hypothesized that it is due to a lack of oxygen when plants die. Scientists believe that the petrification process begins when a plant becomes buried by the sediment at the bottom of a river, not unlike mold and cast fossils. The minerals in the sediment then seep into the open spaces within the wood and preserve it, allowing it to slowly turn into a fossil over time.

How Long Do Fossils Take to Form?

The processes for mold and cast fossils, insects in amber, and petrified wood take a long, long time. These types of fossils generally take millions of years to properly form. Whole animal fossils, on the other hand, are formed much faster. These fossils are generally so well-preserved that their very existence implies that it's a relatively fast process. In general, the time it takes to form a whole animal fossil is only as long as it takes for the water or sap around the animal to solidify.

Where and How Are Fossils Discovered?

Fossils can be found all over the planet, from arid deserts to frozen tundras. Many of them are discovered when the rock surrounding the fossil is brought to the surface by earthquakes or similar events, where it's eventually weathered away by rain and wind to reveal the fossil within. Other fossils are discovered by paleontologists who embark on scientific digs to find them.

One of the most common places fossils are found is in the sedimentary rock near bodies of water. These rock formations are made from the clay, mud, silt, and sand in oceans, lakes, rivers, and swamps that have turned to stone over millions of years. These types of fossils are created when the body of a deceased animal is buried underwater by moving sediment.

Whole animal fossils are most commonly discovered in ice because it's able to preserve the entire body so effectively. Entire woolly mammoths have been discovered frozen in ice in Siberia.

Another common place where fossils are found is in forests. The types of fossils most commonly found in these areas are petrified wood and insects encased in amber. Other fossil discoveries in forests throughout the years have included tree frogs that are millions of years old and even an ancient village partially preserved in petrified wood.