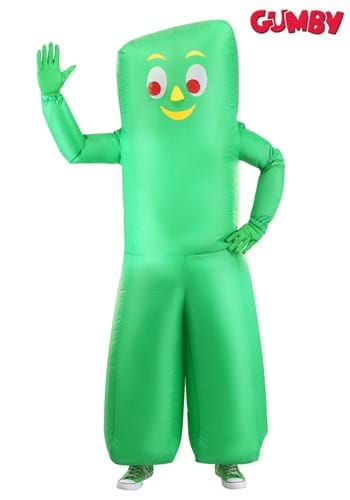 A Bit of a Stretch

If we were living back in the 1950s and told you about our idea for a TV show revolving around a stretchy green stick guy, you'd probably have thought we were crazy. But the show would be even stranger than that, we'd eagerly insist: There would be a talking red pony, villains with cube-shaped heads, a yellow dinosaur who aspired to be a detective, a flying blue mermaid who could spit blue goo balls, a mastodon and a chicken.

But the joke would be on you, dear reader, because our... ahem, we mean Art Clokey's idea... would result in the beloved Gumby franchise, which has managed to spawn two television series, a feature-length film and other things. Even if you don't know Gumby's name, you surely recognize him when you see him. He's been part of pop culture for decades now, so we couldn't agree with you more when you say he would make a great costume for your next party.

It doesn't take any stretch of the imagination to see how you'll be the star of your next costume party in this Adult Inflatable Gumby Costume. This exclusive, officially licensed green bodysuit features a printed Gumby face, complete with a 3D nose and mesh-covered character eyes. It utilizes a fan installed in the back to inflate. (The fan requires four AA batteries, not included, and a Phillips-head screwdriver is required to open the battery pack.) The bodysuit has a back zipper for easy wear, along with elastic at the wrists and ankles for a comfy fit.

Once you slip into this Gumby costume, you'll be all set for some fun adventures, especially if you can round up Pokey, Prickle and Goo. Just watch out for the G and J Blockheads!