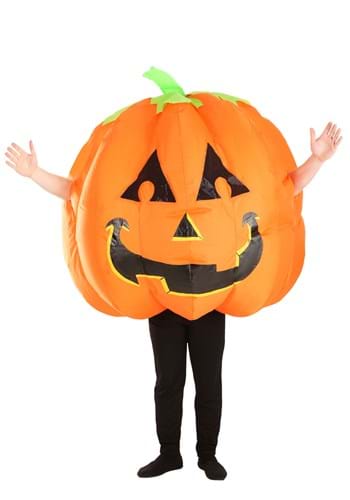 People have been carving jack-o’-lanterns at Halloween time for hundreds of years. But did you know they were originally made out of turnips or potatoes instead of pumpkins? The tradition originated in Ireland, with the story of Stingy Jack. In short, Jack made a deal with the devil, and when he died, he wasn’t allowed to enter either Heaven or Hell. He was doomed to wander the earth for eternity with nothing but a burning coal inside a hollowed-out turnip to light his way. He then became known as “Jack of the lantern,” or “Jack-o’-lantern.” People began to carve their own versions of the lantern to ward him and other scary spirits away. When Irish immigrants settled in America, they discovered that pumpkins worked really well to make jack-o’-lanterns, and the rest is history!

Originally, jack-o’-lanterns were made with scary faces to keep evil spirits away, but these days, we also like to make them cute and comical. This Adult’s Grinning Inflatable Pumpkin Costume is sure to keep you in good spirits when you wear it! Our team of designers wanted to make something larger than life to keep your Halloween festive, and we think they succeeded! The bright orange fabric inflates to a beautiful pumpkin shape when you put on the costume and turn on the fan. The cut-out eyes are layered with clear vinyl and black mesh so they will appear dark from the outside, but you’ll still be able to see a little bit of what’s going on out there!

While some people enjoy carving faces into irregularly shaped gourds, many prefer the most perfect pumpkin possible. This Adult’s Grinning Inflatable Pumpkin Costume will give you that lovely plump shape so you can spread plenty of happiness this Halloween. You’ll be grinning almost as wide as the printed jack-o’-lantern face while you’re wearing it!